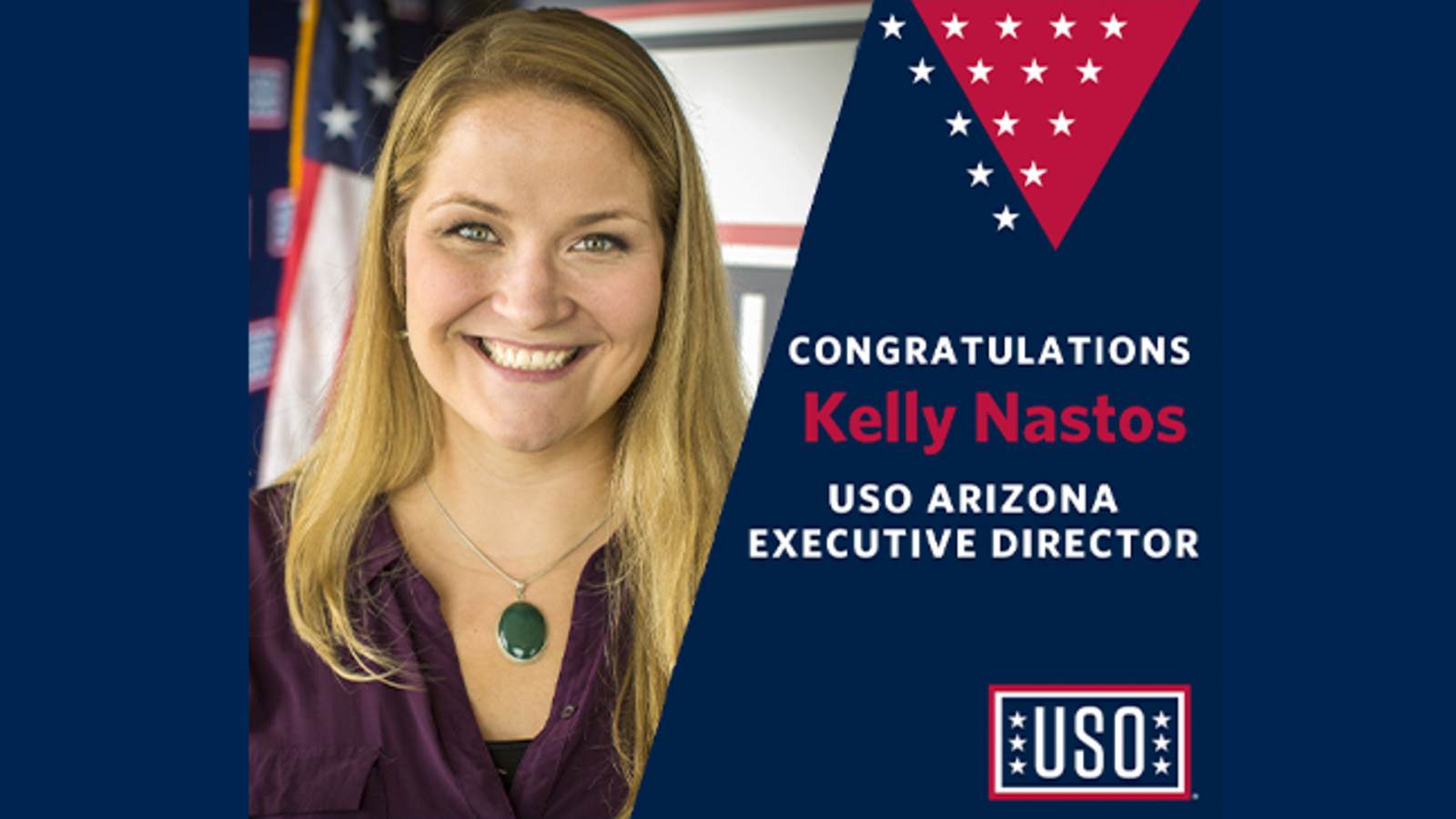 PHOENIX, AZ – The USO, a non-profit organization dedicated to strengthening America’s military service members by keeping them connected to family, home and country, throughout their service to the nation, is proud to announce the promotion of Kelly Nastos as the new USO Arizona Executive Director. Nastos has been an instrumental staff member of the USO for nearly a decade, devoting much of her career to supporting military service members and their families around the world.

Nastos began her USO journey as a volunteer for USO South Carolina. Inspired by her direct service experience in providing meaningful connections and resources to the troops stateside, Nastos joined the USO Afghanistan operations, where she served our troops on the frontlines for two years. Upon transferring to USO Arizona as the Operations and Programs Manager, Nastos was entrusted with leading USO Arizona’s airport center operations and external programs, rapidly expanding our reach by quadrupling the number of military members served.

Just months after joining the team, Nastos spearheaded the opening of the USO center at Military Entrance Processing Station Phoenix. Her determination to establish a USO presence in Southeastern Arizona resulted in a new USO center at Fort Huachuca and an addition of two new staff members. Nastos continued to build and expand our reach across Arizona, opening a USO center in the Military Freefall School barracks at Yuma. Her passion for the USO mission, paired with her exceptional leadership and growth within the organization has led to natural transition to USO Arizona Executive Director.

“Kelly has been a visionary team member in the growth and mission delivery strategy for USO Arizona. As USO Arizona expanded operations including USO at Phoenix MEPS, USO Arizona Fort Huachuca, and USO Arizona at Yuma Army Proving Ground, Kelly developed innovative and impactful programs and events which were customized to the needs of our unique military communities throughout Arizona,” said USO West President, Bob Kurkjian. “Kelly’s unique experience and dynamic perspective will build upon USO Arizona’s operational initiatives and commitment to strengthening America’s military across Arizona.”

“The USO has flourishing relationships within the greater Arizona community and I’m looking forward to leading the charge in building new strategic partnerships and finding new ways to deliver meaningful programs and services for our deserving military community,” said Nastos. “It’s a true honor to be part of an organization that strives to go the extra mile for our military service members no matter where their journey takes them.”

Nastos is an Honorary Commander for the Arizona Air National Guard 161st Air Refueling Wing. She holds a Master of Arts in Human Services Counseling: Military Resiliency from Liberty University, a Bachelor of Science in Special Education from the University of Cumberland, and is a Certified Associate in Project Management (CAPM).

For more information about USO Arizona and how to get involved, visit Arizona.USO.org.

The USO strengthens America’s military service members by keeping them connected to family, home, and country, throughout their service to the nation. At hundreds of locations worldwide, we are united in our commitment to connect our service members and their families through countless acts of caring, comfort, and support. The USO is a private nonprofit organization, not a government agency. Our programs, services and entertainment tours are made possible by the American people, the support of our corporate partners, and the dedication of our volunteers and staff. To join us in this important mission and learn more about USO Arizona, please visit USO.org or follow us on Facebook, Twitter and Instagram.