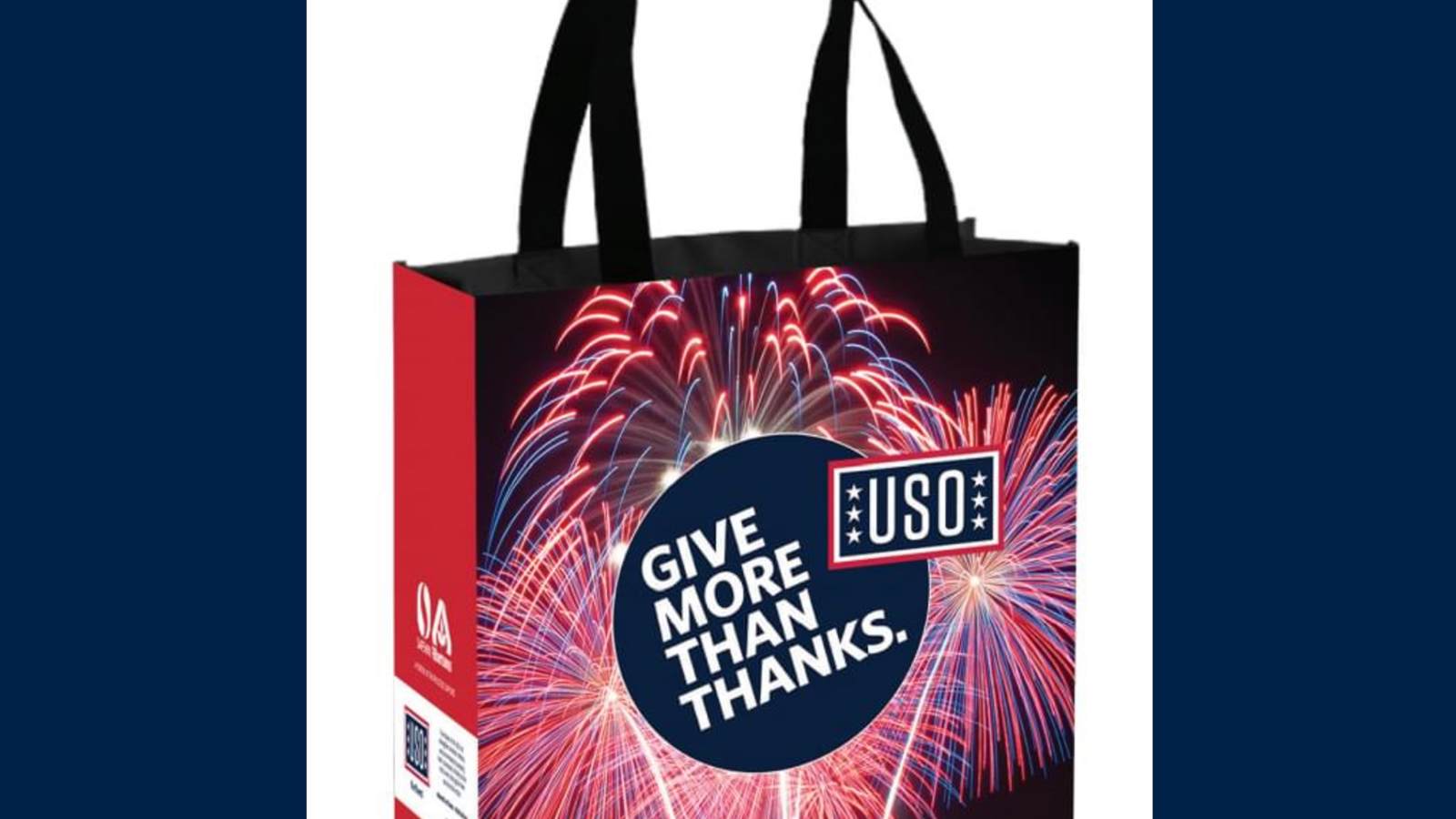 Portland, OR (June 3, 2021) – Safeway and Albertsons stores in Oregon and Southern Washington launched a reusable shopping bag campaign to support the USO Northwest, an operating location of the United Service Organizations, Inc. (USO). On June 1, Safeway Albertsons introduced two bag designs in stores. The first design features an American flag and a silhouette of a saluting soldier. The second design features fireworks and the USO 80th anniversary “Give More Than Thanks” campaign logo. Bags can be purchased at any Oregon or SW Washington Safeway store for $1.99 with 50 cents from each bag purchased going to the USO.

“Safeway Albertsons is a longtime supporter of the USO Northwest and its commitment to military service members in Oregon and Washington,” said Jill McGinnis, Director of Communications & Public Affairs for Safeway Albertsons. “The reusable shopping bag program is an opportunity to honor the USO’s commitment to active military and their families and provide a patriotic designed bag that will be a hit with our shoppers. A portion of the sales for each bag sold will go to the USO Northwest.”

The USO Northwest center at Portland International Airport began operations in 2014. Along with the center at PDX, USO Northwest mobilizes to serve military service members across the area. Most recently, USO staff and volunteers brought pop-up gaming and wellness centers to hundreds of National Guard service members stationed at Salem, Redmond, and Portland COVID-19 vaccination sites. Each pop-up provided the men and women of the National Guard with a break during the demanding shifts by offering gaming, massages and refreshments on-site to enjoy.

“Here in Portland, we’re proud to be part of the USO’s legacy of serving America’s armed forces,” said Jeff Keller, USO Northwest center manager at PDX. “Because of our amazing partnership with Safeway Albertsons and their commitment to USO Northwest, we’re assured we’ll still be able to serve our nation’s service members and their families in any way they need.”

“Thanks to Safeway Albertsons and their generous offer to include USO in this summer’s bag campaign, USO can continue to provide meaningful support to military service members across Oregon and SW Washington,” said Don Leingang, USO Northwest Executive Director and Commander, U.S. Navy (retired).

USO Northwest continuously adapts to the needs of our men and women in uniform and their families, developing new programs and services to support those who need it most, including morale-boosting and family-strengthening programs, deployment and redeployment support to help servicemen and women adjusting to the duty ahead, resiliency training for families facing multiple deployments, as well as discreet and compassionate escorts and other support for families of the fallen.

In 2021, the USO is celebrating 80 years of strengthening America’s military service members by connecting them to family, home and country, throughout their service to the nation.

To get your own reusable commemorative shopping bag, visit any Oregon and Southern Washington Safeway or Albertsons store. Bags are available at the check-out stands in stores while supplies last.