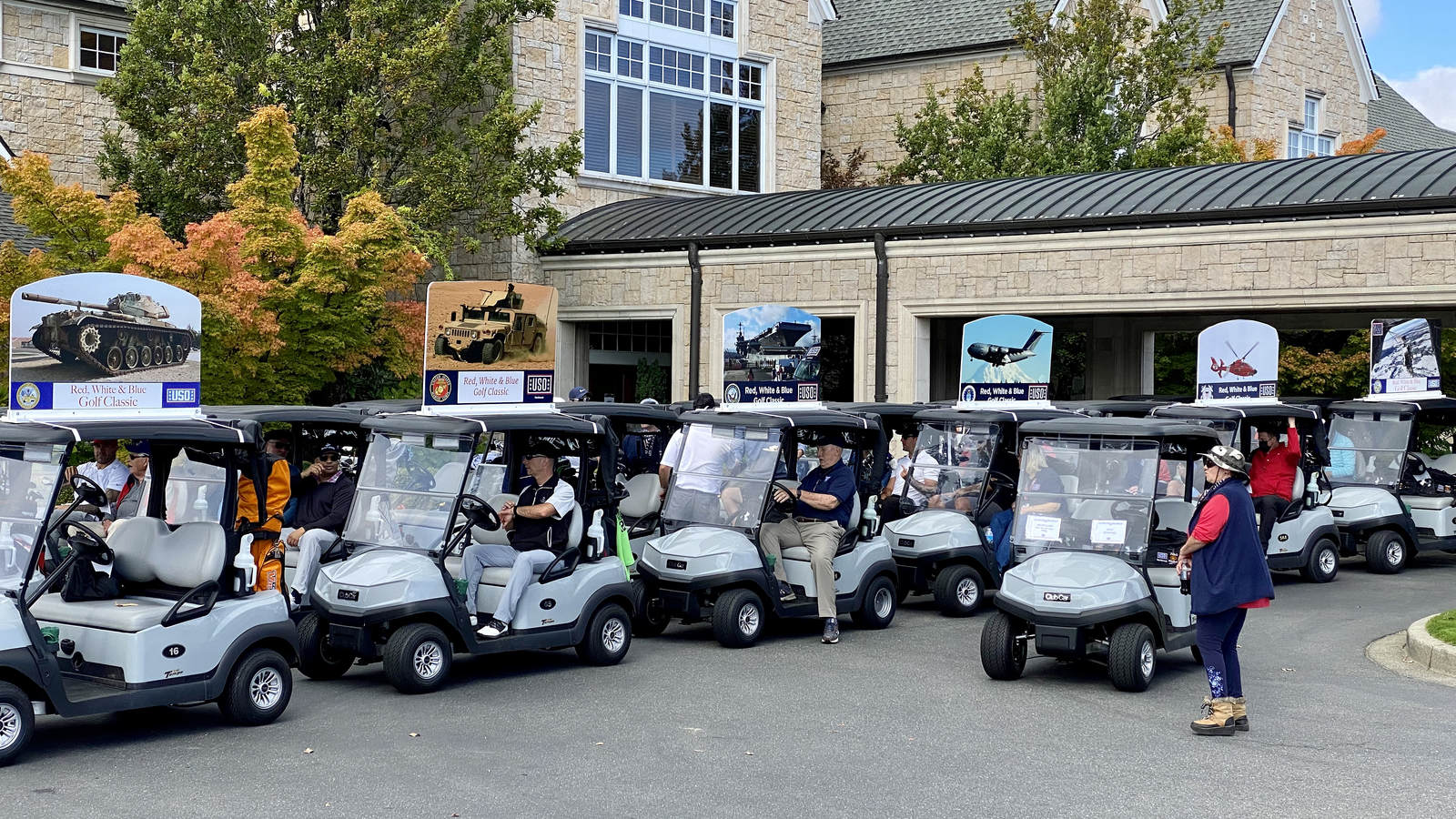 SEATTLE, WA (September 23, 2021) – Patriotism was in full swing at USO Northwest’s ‘Red, White & Blue Golf Classic’, held September 23rd at The Golf Club at Newcastle. This year’s golf classic commemorated the USO’s 80th Anniversary of supporting our local military and their family members in the Pacific Northwest. The Red, White and Blue Golf Classic is the Northwest’s largest golf tournament in support of our military and featured over 50 supporting sponsors.

Prior to the tournament, the “Festivities on the Green” kicked off with an incredible National Anthem performance by SGT Tricia Scheer of the Washington National Guard, supported by the Kent, WA VFW Post 6785 performing the Presentation of Colors. Afterward, TJ Fase, USONW Board Member and Sales Director of Heritage Distilling Company, Inc., thanked all sponsors and golfers attending the event. Pam Valdez, USONW Board Chair and former Vice President at The Boeing Company, shared why this tournament is so important to The Boeing Company and the military we support.

After 18 holes of golf, the evening concluded with the recognition of the day’s top teams. This year, the Army team won the coveted “Chairman’s Military Cup” with a score of 60. The Army team was composed of the following Army Team members: Sergeant Major Kirk Medina, Sergeant First Class Randy Cavazos, Sergeant First Class John Bloomquist, and Sergeant Caleb Brinson. The National Guard team also scored 60 but the Army team won in a scorecard playoff. The USO also recognized the “Permission To Start Dreaming” Foundation golf team, who took first place honors overall with an impressive score of 56, edging out the “Volunteers in Philanthropy” golf team in another scorecard playoff.

“Many of our local military families are already feeling the effects of continued deployments and COVID-19 support to their local community, so it’s vital that local companies and patriots who desire to partner, stand with us to ensure USO programs and services continue,” said Donald Leingang, Executive Director of USO Northwest and retired Commander, U.S. Navy. “We appreciate the corporate and community sponsors who stepped forward to help support our military and their families in this time of need.”

Each year the USO Northwest’s Golf Classic welcomes more than 200 golfers, including local celebrities and military heroes from all branches of the armed forces on two courses.

About USO Northwest For 80 years, the USO has strengthened America’s military service members by keeping them connected to family and loved ones throughout their service to the nation. USO Northwest (USONW) continues that mission today by serving thousands of military and their families annually throughout Washington and Oregon. USO Northwest provides a home away from home by offering a safe, comfortable, and relaxing lounge as they prepare for or are coming home from deployment through four USO Centers located at Sea-Tac International Airport, Joint Base Lewis-McChord, and Portland International Airport. In addition, USONW also serves our military and their families through three USO Mobile Canteens. The Mobile Canteens expand our service delivery by offering the military the same kind of support we provide at our stationary centers, but in the field during trainings, pier side for deployments and homecomings, and throughout military locations in the Pacific Northwest. Supporting America’s military was the first mission of the USO, and over time, the USO has refined this mission, developing new programs and services to meet the ever-changing needs of our military and their families, all the while, holding steadfast to our original mission. USONW provides support to those who need it most, including morale-boosting and family-strengthening programs, deployment and redeployment support to help servicemen and women adjusting to the duty ahead, resiliency training for families facing multiple deployments, as well as discreet and compassionate escorts and other support for Families of the Fallen.

USO Northwest is not a government agency, but a private, nonprofit organization that relies on the generosity of individuals, organizations, and corporations to support its activities. USO Northwest does not receive any government funding. For more information, or to make a tax-deductible contribution to USO Northwest, visit us online at https://northwest.uso.org/support/donations.