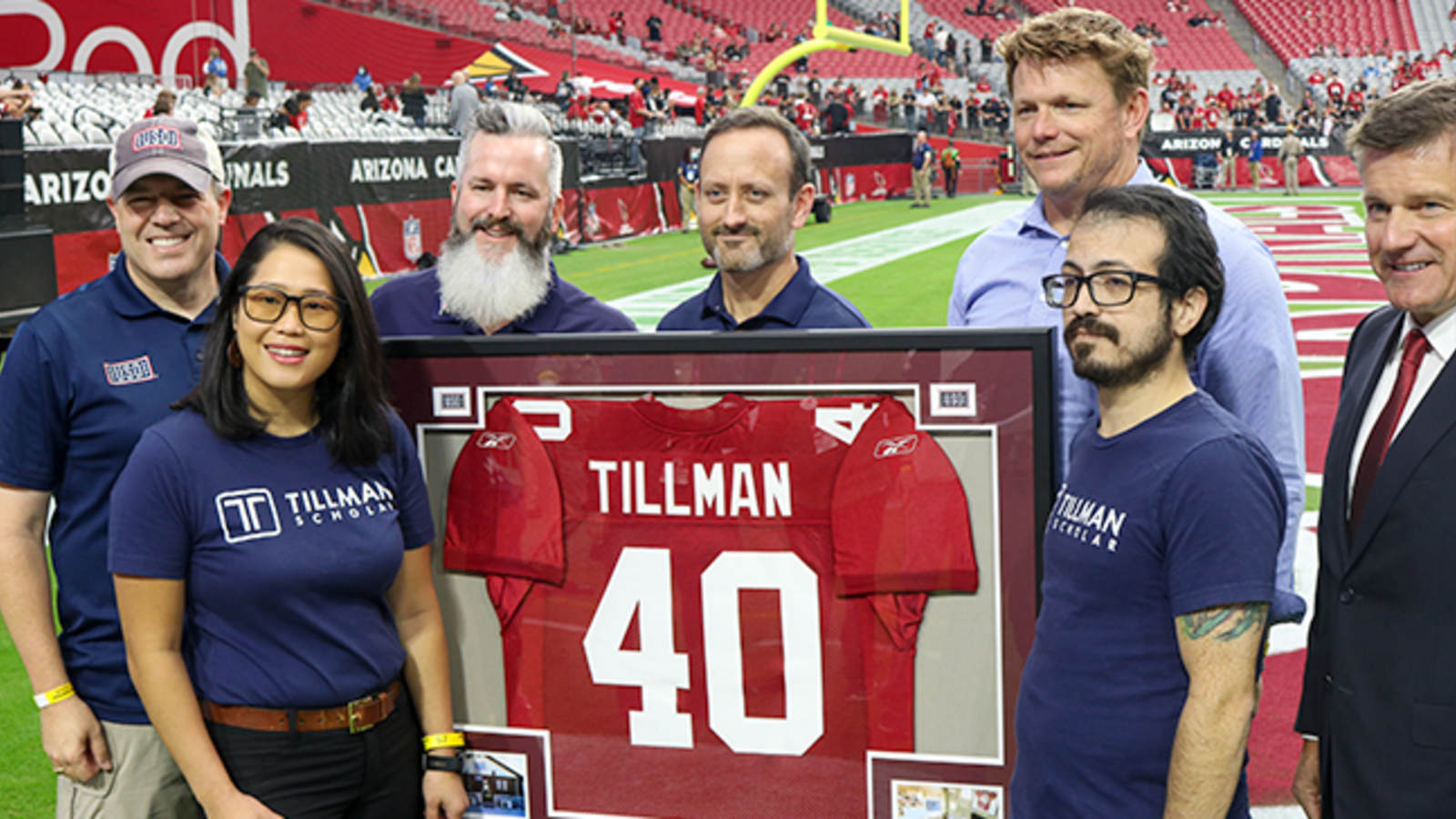 For more than 15 years, the jersey of former National Football League (NFL) safety and United States Army Ranger Pat Tillman was hung inside the USO center named after him at Bagram Air Base in Afghanistan. Over the past weekend, his family foundation had the jersey returned – fittingly at halftime during the Arizona Cardinals game.

After the closure of military facilities and the center in Afghanistan, the jersey returned to the United States. During a ceremony at State Farm Stadium, USO West Regional President and Naval reserve officer Bob Kurkjian presented the special jersey to the Pat Tillman Foundation to honor the more than 750 Tillman Scholars they have provided scholarships to since its founding, many of whom likely passed through that same center.

“Pat’s jersey was the centerpiece of the Tillman Memorial USO center at Bagram Airfield, and for our service members and our allies who visited the center, it came to symbolize all that Pat’s legacy and the USO represent: family, home and country,” said Kurkjian, a veteran of both Iraq and Afghanistan, whom himself found comfort and resilience at the Bagram USO. “I think Pat’s light burned a little brighter every time a dusty, weary soldier set foot in the USO, seeking solace, comfort, and just a momentary escape from the war around them.”

Tillman walked away from a lucrative NFL career to join the Army following the terrorist attacks of September 11, 2001. After Tillman was killed in action in 2004, Pat’s family and friends started the Pat Tillman Foundation to carry forward Pat’s legacy by giving military service members, veterans, and spouses who embody those principles the educational tools and support to reach their fullest potential as leaders, no matter how they choose to serve.

The jersey presentation comes as part of the NFL’s Salute to Service initiative, and the USO and NFL coordinate various opportunities for service members, including USO Military Virtual Programming (MVP), MVP Champions series, tours, and meet and greets.

“We sincerely appreciate the donation of this jersey from the USO, and the way that the USO has honored Pat’s memory by serving veterans in Afghanistan and around the world. The Pat Tillman Foundation, also an NFL Salute to Service Partner, shares a deep conviction that our country’s service members, veterans, and spouses have so much to offer this country,” said Dan Futrell, 2011 Tillman Scholar, and current foundation CEO. “It is from this community that we’ll see the next generation of leaders leading against our greatest challenges driven by the values that guided Pat’s life.”

The NFL invested $250,000 to build the Pat Tillman Memorial USO in 2005, and the jersey was donated to the USO at the center’s grand opening. Since 2007, NFL players and coaches have traveled on USO Tours to 26 countries to engage with more than 97,000 service members. With the support of the NFL partnership, the USO opened USO Lakenheath – the first center in the United Kingdom – on Nov. 4, which will support more than 22,000 military personnel in the area.

Throughout November, the NFL highlights its Salute to Service initiative with military appreciation efforts during games and traditionally coordinates events and programs with local USO locations and military communities. Additionally, the NFL supports an annual USO matching campaign that encourages fans and supporters to donate to the USO mission. To donate to the USO, visit www.uso.org and click the red “DONATE” button at the top of the page.