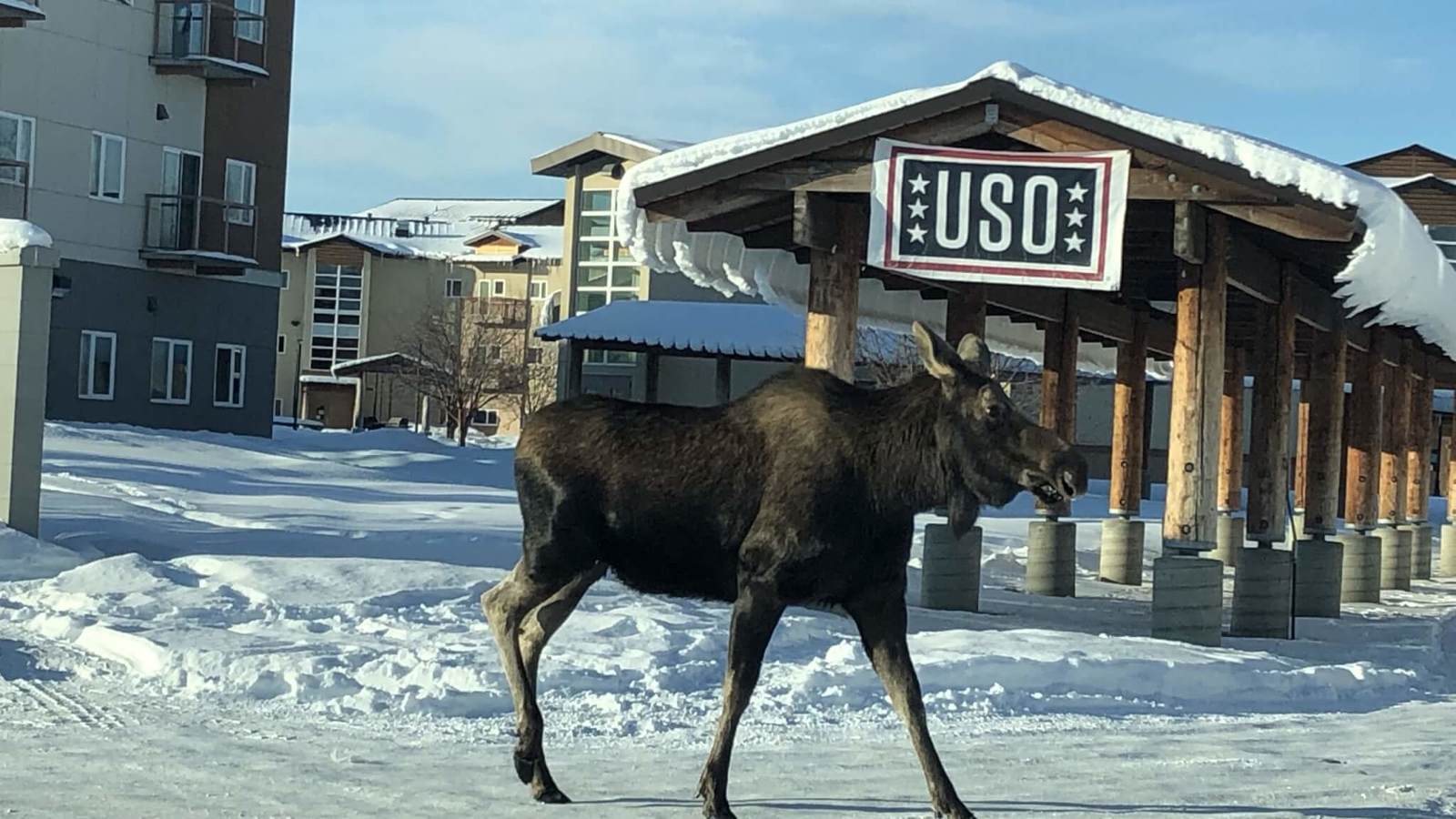 In March, Tech Sgt. Ryan Williams took a giant leap forward in his military career. After 14 years in the U.S. Air Force, he transferred his enlistment to the U.S. Space Force.

Even in non-pandemic times, it would have been challenging for his family and friends to attend the ceremony at Joint Base Elmendorf-Richardson (JBER) in Anchorage, Alaska.

So USO Alaska arranged the next best thing.

They set up a Zoom call, beaming in Williams’ friends and family from around the country. His uncle, a retired U.S. Army colonel, gave the oath of reenlistment.

“It meant a lot to keep it in the family,” Williams said. “And it meant a really lot to me.”

It’s one example of how USO Alaska serves the more than 27,000 service members and their families stationed across America’s largest state.

Since 1941, the USO, a private organization that relies heavily on volunteer support, has supported military men and women at locations across the United States, around the world, and in combat zones.

Five years ago, USO Alaska opened its JBER Wellness Center and Alaska Center, enabling the organization to provide support to service members at the 14 military bases spread across the 663,000 square miles that make up the “Last Frontier.”

As it did for most organizations, the Covid-19 pandemic shifted much of USO Alaska’s programming virtual or socially distanced this past year. USO volunteers still banked nearly 4,000 service hours and made more than 136,000 service connections.

Now, as case numbers decline and vaccinations increase, Banks’ team plans to get back on the road — and in the air.

“The goal in 2021 is to have an opportunity for engagement with every service member in the state of Alaska,” he said.

Banks’ goal comes with certain challenges, like Alaska’s terrain. According to the USO West’s 2020 Impact Report, USO Alaska covers the largest geographic service area of any state through its mobile programming.

“It’s a logistical puzzle, there’s no doubt about it,” Banks said. Only a small portion of the state is accessible by roads, and some isolated locations can only be reached by snow machines or boats.

Take Juneau, for example. This February, USO Alaska made its first trip to the state capital to meet with 250 Coast Guard members. Since Juneau is inaccessible by road, the USO’s expeditionary team flew into the city.

“We’re already planning our next trip back, and they said, ‘Is there any way we can bring Taco Bell?’” Banks said.

Even for people who live in larger cities like Anchorage and Juneau, life in Alaska can be an adjustment, Banks said. Stores and other resources that people are used to finding easily in the lower 48 — like certain fast foods — can be harder to come by.

“Even if you live by one of those cities, it can feel like you’re on a little bit of an island in Alaska,” Banks said.

In addition to its stunning natural beauty and abundant wildlife, parts of Alaska are also known for its long days and nights, which can contribute to seasonal affective disorder (SAD). Cold temperatures are also a fact of life.

During his first winter in Alaska, Williams spent 30 days at Point Barrow, the very top of Alaska, during the winter solstice.

“During that period, you don’t see any daylight, any sunlight at all,” he said.

A Texas native, Williams traded his civilian summertime attire for clothing better suited for Alaska’s cold temperatures, which he has felt drop into the negative teens.

In addition to his service duties, Williams has stayed busy supporting the USO’s mission. He was recently named USO Alaska’s volunteer of the year, recognized for performing more than 700 hours of service.

He organizes frequent board game events, a way to get servicemembers out of their rooms and give them a chance to socialize — and feel less isolated.

“There’s a lot of challenges to Alaska, but I wouldn’t live anywhere else,” Banks said.

The support USO Alaska provides — through board games, meals, and wellness programming — can help service members adjust to their new northern home. And that’s what drives USO Alaska’s mission to get everywhere there’s a service member, no matter how far-flung the location.

“We want to be that home away from home for them,” Banks said.